With Covid 19 AND a new baby, we had been in lock down since March. While trying to find the balance of now homeschooling the kids and being pregnant, life kept us busy for those first few months. However, by June boredom was kicking in and we all were especially missing our annual Summer trips.

We often enjoy heading to nearby theme parks and arcades in the summer and have been really bummed out to not be able to visit them again this year. So during lockdown I decided to bring the Carnival to us!

In college I took an early education and childhood development class One day our professor showed us the Youtube film Caine’s Arcade. It was about a little boy named Caine, who spent his summers at his dads auto-shop. Caine would take all of the cardboard boxes out of the back storage room and create games for the clients of the shop to play as they passed by. Incredibly creative and from his imagination an entire movement was born.

This sparked my idea on how we were going to make our Carnival. I wanted to use as many recyclable materials as I could and get the girls involved in creating as much of it as they could by themselves.

This wasn’t a birthday party or anything, it was just an ordinary day for the 5 of us to enjoy so I tried my hardest to not be “extra” …. but me being me normally means I’ll go a little beyond 😉

I popped a couple of items in my cart, planned it for the following Saturday and got the girls to work on our games!

I handed the girls a bundle of tickets each that I had purchased on Amazon (just to make it feel legit) and bought some candy, toys from the dollar store, and some of their favorites from Target and put them all into a “Prize” bucket. They could use their tickets to play games and when they won a game they would get to dive into the Prize Bin.
THE GAMES

This was super easy. I ordered some bean bags and took some used (and washed) tin cans. We measured some paper to decorate them and Sienna got to work. She had a lot of fun designing each can as she pleased.

We set the cans up in a pyramid and moved the bean bags about 10 ft back for a fun and easy Bean Bag Toss.

Savannah was in charge of Spin to Win. She cut a large circle out of cardboard, then decorated it with card stock and chose her prizes. We actually used our Twister board spinner for the center. They loved spinning and winning their prizes and extra tickets.

For this one we took some beer bottles and I printed some different sized clowns and simply hot glued them on. I ordered some rings and the goal was to toss and hoop them over each bottle. Small clowns won candy, Medium clowns won Bubble gum and Large Clowns won a Prize from the bin.
SUPER DUPER CLAW MACHINE
Okay this one I was pretty proud of.  The girls LOVE the claw machine at the arcade. I knew I had to attempt to make one myself so I took an Amazon box and saw what I could do.

A cardboard box, duct tape, acetate, string, a coat hanger head and stick and I just made it up as I went along to make it seem as close to a ‘claw machine’ as you could with a carboard box.

We bought a multi-pack of “Squishies” from target that we decided to use as prizes and I wrapped pipe cleaners around them with a loop that our hook could catch on to. the girls could loop and toy and guide it to the exit on the front left side of the box… success!

This one was a full Amazon purchase, but it was super cute. Some lucky ducks floating in a pool, each duck had a number on the bottom. The girls had to find a matching pair to win a prize.

This one was simple and to give the girls a good giggle. I bought a bunch of car wash sponges from the Dollar Store, Filled a bucket with water and placed a chair about 15 feet away. They LOVED throwing their sponges and absolutely soaking us …. they kept using their tickets for that one.

Now this one might remind you a bit too much of beer pong… but it was all very kid appropriate. I bought a bunch of ping pong balls, some red solo cups and candy to fill them with. I hot glued the cups to a board and the girls would toss their pin pong balls from the end of the table to win whatever was in the lucky cups. Simple and fun!

Pretty simple, we had cones to create a goal post, a goalie (Thanks Daddy) and a soccer ball. A ticket let you have 3 chances to beat the goalie. They always love beating Dad at anything so this was extra fun for them.

Our carnival wouldn’t have been complete without the trimming so we added to the fun with a face painting station. We already had our Blue Squid Facepaint from Amazon and I googled frantically at the girl’s requests for a “moon butterfly” and a “monarch”

We had Hot Dogs, Pop Corn & Cotton Candy – Made from our very own Cotton Candy . Just adding further to our day of fun.

It was a day filled with fun and exactly what we needed during these strange times.

We ended our day feeling like we had actually had a fun outing. It was fun, simple and refreshing.

Even Saoirse-Skye enjoyed her nap as we strolled from game to game.

Have you tried anything entertaining at home while being in Lock down?

The best thing about the carnival is, you don’t even have to be in lock down to do something like this. It was just a fun family day that we were all able to be involved in and enjoyed together.

Hope this inspired you to build your own Carnival or Arcade one day. 🙂

Sell all posts by Georgia Johnson → 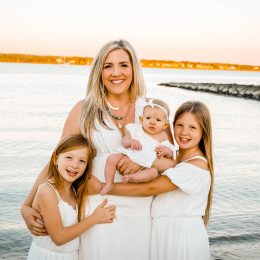